Curled toes paralysis is one of the major causes of lameness in baby chicks in less than two weeks. It is majorly caused by improper incubation temperature, vitamin deficiency (riboflavin), or injury in the leg during transportation or shortly after hatching.

This can be fixed by vitamins supplement, reducing the temperature of the incubation, proper handling, and supporting movement using splints or tape on the toes. Although, in severe cases, the condition will become permanent.

Lameness in poultry chickens is not going in a hurry soon. It has come to stay, and the only way to face it is through proper management at various conditions, starting from the hatchery, transportation, feeding, and management in general.

I have had my share of challenges in managing curled toes paralysis in my broiler chicks, especially, and I must confess it has been a hell of a challenge. And I know you are experiencing the same problem with your poultry chicks. If not, you will not be reading this piece right now.

You may have wondered how to fix curled toes paralysis in chickens, especially after randomly trying so many options to no avail- probably because lameness is a multifactor condition.

Right now, two of my broiler chicks are having this problem, although one has fully recovered, and the other is still undergoing therapy in isolation. So, I will share with you how I fixed the curled toes of my broiler chicks and other techniques that other farmers are using that have proven to work. But firstly, we have to briefly look at the causes, symptoms, how to fix it, and prevention.

What causes curled toes in chickens?

The current literature gives the impression that curled toes paralysis is synonymous with riboflavin (vitamin B2 ) in the chicken diet.

In a report of the National Research Council (1971), it is stated that a lack of riboflavin in the diet of chickens brings about diarrhea, retarded growth, and paralysis of the legs, sometimes called “ curled toes paralysis,” which causes the chick to walk on his hocks with toes curling inward and that the condition is the only obvious symptom.

However, these findings have not been consistent among researchers. The present experiments suggest that curled toes paralysis is a minor of riboflavin deficiency in modern broiler chicken.

It occurred only in very deficient diets containing about one-third of the recommended level. When it occurred, the morbidity was less than 10%. This suggests that they are other causes of curled toes paralysis aside from riboflavin deficiency. One of those other causes that have contributed to curled toes paralysis and paralysis, in general, is high incubation temperature.

Reducing temperature at the end of incubation will help prevent lameness issues- Edgar Oviedo ( Professor- Broiler Nutrition and management.). Oviedo added that lameness issues that start in the hatchery affect o.5% to 1 % of all flocks.

It may also be caused if the chick is poorly positioned within the egg or the humidity is not adequate during hatching.

Note: If the curled toes develop after the chick is more than a week old, management and nutrition are the primary suspected causes.

See also  10 Amazing Facts About the Sweater Gamefowl: The Unbeatable Opponent of All Gamebirds

How to fix curled toes paralysis in chickens

Correction of the curled toes is through physical therapy and vitamin supplement. This can be so tasking both it is rewarding at last.

Here, you have to encourage and support the chick to work normally while supplementing the feed or water with essential vitamins, especially with riboflavin (vitamin B2), which is the major cause of curled toe paralysis.

To correct curled toes, you can use Vetwrap to wrap a single toe to hold it straight gently.

If all the toes were affected, you might create a little “sandal” using tape and cardboard.

To make a sandal, place the foot on the cardboard, trace, and cut out. Then, with the chick standing on the cardboard, gently tape the toes to the cardboard |” toes” of the sandal, gently aligning the chick’s toes as you apply the tape. Now you can leave the sandal on for 24 to 48 hours, then remove and check for the toes’ progress. Within 2 to 3 days, the chick should work if caught and treated at the first sign of an issue.

In a more serious case, when you notice the chicks are now using its hocks for support, you need to provide a cushion on it to avoid that hatch friction pain from the floor. To create the cushion, put a piece of soft material like foam, place it on the hocks and wrap it with tape.

Encourage the bird to walk while supplementing their feed and water with vitamins and minerals that aid in strong bone formation. Ensure the supplement contains vitamins B2, vitamin E, vitamin K, vitamin D3, manganese, calcium, and phosphorus – their importance in bone formation cannot be overemphasized. At least, this I looked out for when I was treating my broiler chick that had a similar leg issue.

You have to be there for the chicks most of the time, especially if it cannot reach for food and water. Normally, chickens don’t die directly from curled toe paralysis but persecution due to lack of food and water. I know it is not easy, but your effort will pay off. 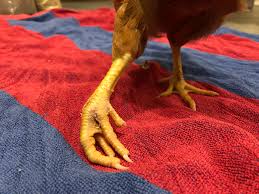 How do I prevent curled toes paralysis in chickens?