In case you’re looking for an ornamental chicken breed that won’t annoy the neighbors but still has plenty of friendly personalities, the Chinese Silkie chicken is worth a look.

Silkies stand out from the crowd in a very obvious way. Some have compared the feel of their beautiful plumage to that of satin or silk. 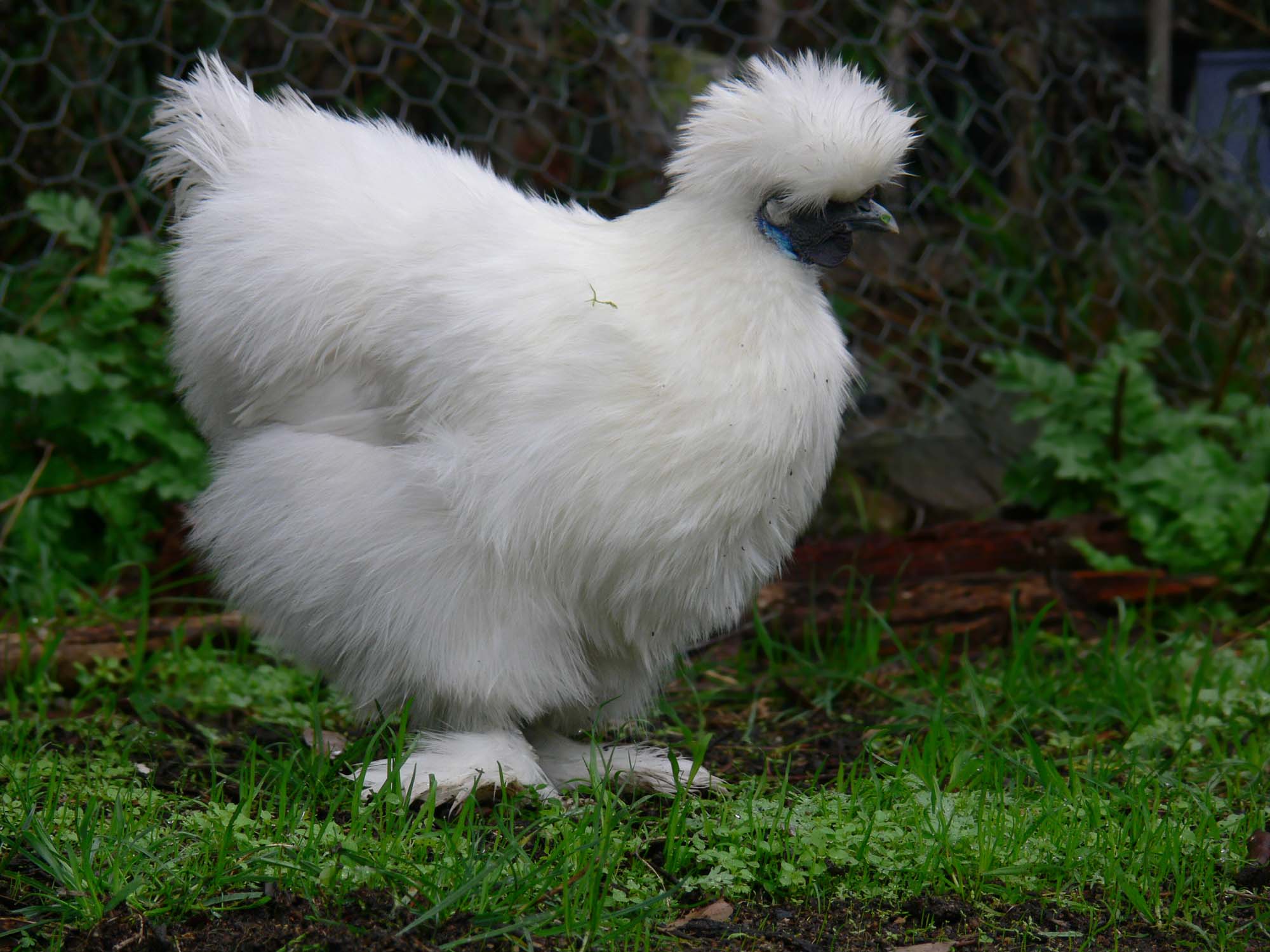 History of the Chinese Silkie Chickens

Although the true beginnings of Chinese Silkie chickens are unknown, the first documented sightings were in China; consequently, the origin of “Chinese Silkie” was given to this breed.

It has also been suggested that the breed came from places like India and Java in Asia. The first known written record of the species, from around the 13th century, describes it as a “furry” chicken encountered by the Spanish explorer Marco Polo in his travels through Asia.

Writer and naturalist at the Italy’s University of Bologna, Ulisse Aldrovandi published a treatise on chickens in 1598 that is still studied and admired today. There, he mentioned chickens that produce wool and others that have “hair like a black cat.”

The exact beginnings of the special combination of characteristics that characterize this breed are obscure, but they are most strongly linked to ancient China.

When looking at the timeline, this first appeared before the year 1200. As a matter of fact, the Silkie is also known as the Chinese silkie chicken.

Other possibilities include Southeast Asian locations such as Java and India. An abundance of data about the Silkies can be found in ancient Chinese texts.

The Silkie chicken has been revered in Eastern cultures for centuries due to the belief that it has superior medicinal properties to those of any other breed.

This belief is supported by research showing that Silkies have higher levels of carnosine production compared to other poultry. Over the centuries, the Silkie chicken has become one of China’s most coveted breeds.

Traditional practices, such as giving Silkies to new mothers as a form of postpartum recovery, date back to a time when such thinking was less grounded in science.

Many Asian countries regard this particular breed of chicken as a culinary delight, and so many recipes center around it.

The earliest written mention of Silkies in writing dates back to the 13th century when Italian explorer Marco Polo described seeing “furry chickens” in Asia.

A second well-written mention can be found in a treatise on chickens from 1598, which is still widely read today.

See also  Chicken Diapers: Everything You Should Know

It was written by Ulisse Aldorvandi of the University of Bologna in Italy, and it detailed the existence of chickens with wool on their bodies or clothing made of hair similar to that of a black cat.

The first examples of the Silkie chicken probably made their way to the West via maritime trade and the Silk Road.

Accreditation with the North American Standard of Perfection came in 1874. The prevalence of Chinese Silkie Chickens coincided with a rise in myths about the breed.

Chickens purportedly clad in mammalian fur were on display at carnivals. In fact, early Silkie sales pitches claimed the breed was created by combining chickens and rabbits.

The Chinese Silkie Chicken is sometimes classified as a bantam breed, though this varies by country and many breed standards list them officially as large fowl.

The bantam Chinese Silkie chicken is typically considered to be a different variety altogether. Whereas the original version of the breed originated in Europe as a standard-sized variety, virtually all North American strains are bantam-sized.

As a result of their small size, Silkies are classified as bantams. Once unique among chicken breeds, Chinese silkie chicken feathering has been developed in several breeds, most notably the Chabo, where it is now standardized in Britain and the Netherlands.

Several analogies to silk and fur have been made. As a whole, the effect is fluffy and light. Their feathers are more down because the barbicels don’t work. Because of this trait, Silkies can’t take to the air.

Bearded and shaved Silkies are the two main types seen. Bearded Silkies are distinguished by the presence of a thick plume of feathers that extends from the base of the beak to the lobes of their ears.

As with the other types, the colors are used to categorize them. Silkies can be shown competitively in a variety of colors, including black, blue, buff, grey, partridge, and white.

There are other colors available besides traditional pinks, such as cuckoo, lavender, red, and splash. All perfect Silkies have dark wattles, small combs in the shape of a walnut, and turquoise in their earlobes.

Along with these distinguishing characteristics, Silkies also have five toes on each foot. The Dorking, Faverolles, and Sultan are just some of the other breeds that share this unique quality.

Their Chinese name, Wu Gu Ji, translates to “black-boned chicken” because their skin, bones, and grayish-black meat are all the same color.

Fibromelanosis is a rare mutation that appears to have originated in Asia and causes chickens to have a form of melanin that extends beyond the skin into the connective tissue.

The Chinese Silkie chickens and other breeds with Asian ancestry carry the mutation. Regardless of feather color, the breed is not as productive as other, more common chicken breeds used for meat.

Chinese Silkie Chicken is a great choice for families who want to introduce their children to chicken keeping and for those who keep chickens as a hobby.

Because of their laid-back docility, friendliness, and submissive nature, they are widely admired.

The males are just as pleasant as the females. They have a gentle demeanor and enjoy interacting with people. Even young children can easily pick them up and cuddle with them.

When kept in a flock with more dominant chicken breeds, the Silkies’ submissive nature can cause tension.

Therefore, the best Chinese Silkie chicken companions are other docile breeds. One excellent illustration is the Polish hen. Famous as companion animals, brooding birds, and decorative birds, silkies have earned a place in the spotlight.

Until the eggs hatch, the hens will proudly sit atop their brood.

Even though chickens aren’t typically thought of as potential pets, Silkies help to close the gap between backyard fowl and household companions.

They thrive in both confined and wild environments. As a species, they lack both flying proficiency and fearlessness. The Silkie is well-suited to urban settings, families, and farms that require broody hens.

When it comes to sitting on eggs, Silkies are among the best chickens. Unfortunately, their own egg-laying abilities aren’t exactly top-notch.

In a normal year, a Silkie hen might only produce 100 to 120 eggs. During the warmer summer months, they might even stop laying eggs altogether.

Though smaller than eggs from larger chickens, these breeds still produce nutritious and small chickens. It has been said that Silkie eggs are actually blue, but this is not the case. Small eggs are a uniform light brown in color.

While Silkies may not set any records for annual egg production, they are remarkably reliable birds. About three eggs are laid per week on average by each hen.

Due to the comfort provided by their feathers, these hens are more likely to continue laying eggs all through the winter.

If hatching eggs is a priority, Silkies are best housed with more prolific egg layers. This trait that makes Silkies such good foster mothers also makes them less likely as biological mothers because it disrupts their egg-laying.

When compared to other chicken breeds, Silkies are not particularly prone to common health problems. The fluffy feathers make them more susceptible to parasites like mites and lice, however. Silkies must be checked frequently for these parasites.

It is important to treat a Silkie that has been infected with parasites as soon as possible. A veterinarian or the pet’s owner and caretaker are both good sources for this information.

The potential for an infestation to spread throughout the flock emphasizes the urgency of treatment. If parasites are not treated, it can lead to severe health issues in chickens.

Silkies need to take regular dust baths to protect themselves from parasites like fleas, mites, and lice. Make sure there are plenty of dust bathing facilities available for the flocks.

Silkies, like all chickens, need regular worming treatment. It is also possible for internal pests to cause disaster in a flock if they go unnoticed and untreated.

Marek’s disease is a bacterial health that can be fatal to Chinese Silkie Chickens. A mutated herpes virus is responsible for this illness. It’s important to note that the virus’s pathogenicity depends on the strain.

Even though many breeders have worked to increase Silkie’s natural immunity, vaccination is another option for protecting the breed from health.

If you’re looking for a fluffy, sociable, and out-of-the-ordinary pet or chicken, a Chinese Silkie chicken is a great choice. They are friendly and affectionate birds that enjoy interacting with humans but don’t get into trouble in the yard or coop.

Unique among chicken breeds, this small chicken has a rich history and a striking appearance.

Chinese Silkie chickens are highly sought after as pets, rather than for chickens, so there is a good market for those who intend to raise them. White Silkies in particular are rising in popularity.

They are one of the most profitable chickens to raise because of their high demand and high market price.